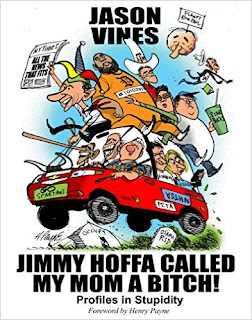 Jimmy Hoffa Called My Mom a Bitch! by Jason Vines

Jimmy Hoffa Called My Mom a Bitch!: Profiles in Stupidity is a compilation of author Jason Vines best columns as an original contributor to The Detroit News political website beginning in June of 2010. The book s outrageous title becomes crystal clear moments into the book as the satire, jaw-dropping true stories and hilarity take off. Who says conservatives aren t funny? says Detroit News Editorial Page Editor Nolan Finley. Jason Vines delivers his smack-down humor without regard to whose nose gets mashed. He punches past political correctness to expose the hypocrisy of the left, the bungling of business and the lameness of our political leadership. If you re looking for subtlety, don t look here. Jason is blunt. And he's right. Jimmy Hoffa Called My Mom a Bitch! is the follow-up to Vines first book, What Did Jesus Drive?: Crisis PR in Cars, Computers and Christianity, the critically-acclaimed, take-no-prisoners, tell-it-like-it-is expose inside some of the biggest crises in American business history. When What Did Jesus Drive? was released as a hardcover on July 4th it also included a new endorsement from America s current dean of Public Relations, PR Week s Editor-in-Chief Steve Barrett: ...kept me gripped from start to finish...I couldn t put it down...buy it, it s great it should be taught in PR schools. The new Jimmy Hoffa book is broken up into chapters of stupidity: Stupid Republicans, Democrats, Bureaucrats, Atheists, Christians, Criminals, Policies, Dictators, People and so on. The Stupid Criminals chapter contains one of Vines most popular columns that appeared in The Detroit News under the moniker, The Wisecracker . The June 29, 2010 column Globe Al Warming Gets Rubbed the Wrong Way, takes on allegations that former VP Al Gore got inappropriately horny with female masseuse at a Portland, Oregon hotel. It is sick, twisted, hilarious and true. Frank Beckmann, host of his own radio talk show on powerhouse WJR and a Detroit News columnist, says of Jimmy Hoffa : I ve known Jason from his days as a wise acre PR flack for Chrysler through the time when he busted the shackles of restricted speech to finally enjoy the completely unfettered world of editorial writing when we shared the pages of The Detroit News. I ve always felt that we ve selfishly hogged his talents to ourselves in Detroit. Much of this book will make you laugh until you cry, but save some of your tears for the realization that what he writes about is all true. That s what really makes us sob. And only a wisecracker like Jason Vines could pull it off. This hilarious, profane, politically-incorrect, auto communications veep was an American original, says Payne. So when I created The Michigan View - a funny, un-PC, opinioned, commentary publication for The Detroit News in 2010, one of the first people I turned to as a columnist was Jason Vines. He jumped at the opportunity. The Michigan View would become a nationally-known publication in no small part thanks to high profile contributors like Jason. He took the column title The Wisecracker and made his mark almost immediately by coining the phrase Masturgate to describe the scandal of the illiterate (honestly) president of the Detroit School Board who resigned after (um) unzipping in front of a Detroit super (still not making this up). Now you know why Detroit is such a great news town. Masturgate ruffled feathers, rolled eyes, and brought us a flood of attention, says Payne. Vintage Vines, in other words. The PR whiz s second career as columnist was born. Vines was a must-read for his sense-of-humor and keen insights as a longtime auto and Detroit insider.
Posted by David C. Hayes at 12:03 PM