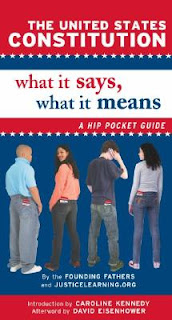 The United States Constitution: What it Says, What it Means from JusticeLearning.org

Affordable, readable, and indispensable, The United States Constitution: What it Says, What it Means allows you to put the most important document in American history in your back pocket. In conjunction with Justice Learning and The Annenberg Foundation Trust at Sunnylands and with an introduction written by Caroline Kennedy and an afterword written by David Eisenhower, this pocket guide appeals to the broadest possible audience. Each Article and each Amendment is followed by a clear and concise explanation, in plain English, that is suitable for both middle and high school students.

On December 8, 2004 President Bush officially signed Constitution Day into law. The law mandates that each year, on September 17th, schools and colleges that receive federal money are required to teach the Constitution. The new law was championed in Congress by Sen. Robert Byrd who famously carries around a copy of the document in his pocket. Sen. Byrd became increasingly alarmed at the lack of civics education-specifically relating to the Constitution-in our public schools and he wanted to take action.

Lightweight, easy to use and easy for everyone to understand The United States Constitution: What it Says, What it Means is an excellent way for students and citizens of all ages to read and completely comprehend the building block of American democracy.

Jon, Dave and Rob are joined by progressive activist Jordan Genso and they talk to one of the heroes of the Flint Water Crisis, Melissa Mays! Calling from Washington, Melissa tells the story of her family in Flint and how she helped to lead the charge right up to Governor Snyder's door. Then, listen in horror as Dave gets really angry, Jordan calls out Rob and, of all people, Jon is the voice of reason.

Please support our show by clicking the links to our Sponsors.
Posted by Abnormal Entertainment at 2:00 AM No comments: 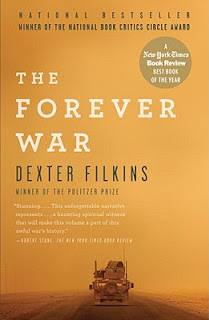 Brilliant and fearless, The Forever War is not just about America's wars after 9/11, but about the nature of war itself.
Posted by David C. Hayes at 12:14 PM No comments:

Jon, Rob and David are joined by longtime progressive radio host Randi Rhodes for a discussion on her voting problems in Florida, who is really feeling the Bern and the statewide repudiation of Marco Rubio. They boys also get into the primary mix, talk Michael Moore and congratulate Jon for scoring such an awesome guest.

Please support our show by clicking the links to our Sponsors.
Posted by Abnormal Entertainment at 11:42 PM No comments: 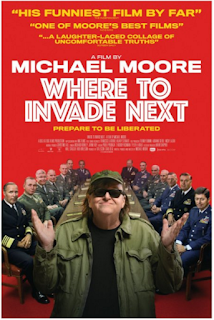 Where to Invade Next by Michael Moore

To show what the USA can learn from rest of the world, director Michael Moore playfully visits various nations in Europe and Africa as a one-man "invader" to take their ideas and practices for America. Whether it is Italy with its generous vacation time allotments, France with its gourmet school lunches, German with its industrial policy, Norway and its prison system, Tunisia and its strongly progressive women's policy and Iceland and its strong female presence in government and business among others, Michael Moore discovers there is much that American should emulate.

Jon, Rob and Dave collect themselves the day after the CRAZY Michigan primary! Listen in horror as Dave admits to Obama fandom! Recoil in shock as Jon tries to explain the infatuation the masses have for Trump! Will Rob vote for Hillary if he HAS to? Find out now!

Please support our show by clicking the links to our Sponsors.
Posted by Abnormal Entertainment at 6:09 AM No comments: 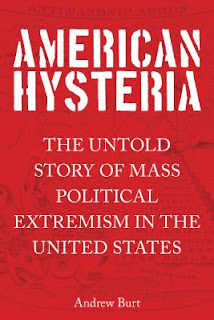 Savvy political and historical analysis with narrative punch, this debut of a new commentator on the American political scene looks at pivotal moments in our history when political outliers moved to the center, getting support from the general populace and those in power. From the Anti-Illuminati movement in the early Republic to the effort to ban Sharia law today, Burt shows how fear of loss of influence propels these movements to the center of American life. Unlike other recent works on American politics, Burt argues that these movements are not random and inexplicable, but are driven by a particular set of circumstances in which those with social status and political power see it slipping away. Engaging in political hysteria blacklists, scapegoating, conspiracies, cover-ups is how they seek to get it back. While covering all American history, main chapters put readers at the center of the early nation's Anti-Illuminati and the Anti-Masons beginning in 1826, The Red Scare, 1919's Palmer Raids, 1950s McCarthyism, and the post-9/11 Anti-Sharia movement. For each political hysteria, Burt looks at the threat the movement rose to confront, its claims for who was to blame, the tools used to accomplish its ends, and how successful it was in convincing more Americans of its arguments. The ultimate aim of the book is to describe not simply what political hysteria is, but how and why it is so successful, so that past instances may be more fully understood, and future dangers avoided. Through the stories and characters who have exemplified hysteria in our past, Burt provides a compelling survey of American political extremism. And he shows that hysteria is no partisan phenomenon, nor simply a product of the lower or less-educated American classes (indeed, the demographic data suggest the contrary). American Hysteria argues that political hysteria is central to our national identity, a type of movement not relegated to the fringes, but rather routinely taking center stage. Wide swaths of the American public, its leaders and its intellectuals buy into the conspiracy theory, ready to sacrifice whatever they must like basic constitutional rights to keep the internal enemy at bay. As Mark Twain put it, history may not repeat itself, but it sure does rhyme. By narrating and analyzing movements of hysteria in our nation's history, this book sheds light on the politics of today and tomorrow.
Posted by David C. Hayes at 12:15 PM No comments:

Listen in awe as Rob and Dave get into an argument about the primaries and just what is what in regard to Bernie Sanders and the reporting! Is Trump inevitable? Who is to blame? Us? Them? Regardless, things are certainly afoot on the political landscape.

Please support our show by clicking the links to our Sponsors.
Posted by Abnormal Entertainment at 9:58 PM No comments: 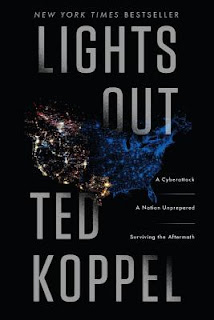 Lights Out by Ted Koppel

In this "New York Times" bestselling investigation, Ted Koppel reveals that a major cyberattack on America's power grid is not only possible but likely, that it would be devastating, and that the United States is shockingly unprepared.

Imagine a blackout lasting not days, but weeks or months. Tens of millions of people over several states are affected. For those without access to a generator, there is no running water, no sewage, no refrigeration or light. Food and medical supplies are dwindling. Devices we rely on have gone dark. Banks no longer function, looting is widespread, and law and order are being tested as never before.
It isn t just a scenario. A well-designed attack on just one of the nation's three electric power grids could cripple much of our infrastructure and in the age of cyberwarfare, a laptop has become the only necessary weapon. Several nations hostile to the United States could launch such an assault at any time. In fact, as a former chief scientist of the NSA reveals, China and Russia have already penetrated the grid. And a cybersecurity advisor to President Obama believes that independent actors from hacktivists to terrorists have the capability as well. It's not a question of if, says Centcom Commander General Lloyd Austin, it's a question of when.

And yet, as Koppel makes clear, the federal government, while well prepared for natural disasters, has no plan for the aftermath of an attack on the power grid. The current Secretary of Homeland Security suggests keeping a battery-powered radio.

In the absence of a government plan, some individuals and communities have taken matters into their own hands. Among the nation's estimated three million preppers, we meet one whose doomsday retreat includes a newly excavated three-acre lake, stocked with fish, and a Wyoming homesteader so self-sufficient that he crafted the thousands of adobe bricks in his house by hand. We also see the unrivaled disaster preparedness of the Mormon church, with its enormous storehouses, high-tech dairies, orchards, and proprietary trucking company the fruits of a long tradition of anticipating the worst. But how, Koppel asks, will ordinary civilians survive?

With urgency and authority, one of our most renowned journalists examines a threat unique to our time and evaluates potential ways to prepare for a catastrophe that is all but inevitable.
Posted by David C. Hayes at 12:16 PM No comments: